Last weekend, hundreds of mountain bikers gathered on the slopes of Sugarloaf for a weekend of downhill mountain biking in the Eastern States Cup Box Showdown; Sugarloaf was stop eight of eleven in the eastern circuit, and a qualifying event for the Enduro World Series slated for August which will also be hosted here at Sugarloaf.

The event consisted of two disciplines: downhill and enduro. The downhill race, which consisted of a single timed stage, led riders from the top of the Tote Road to the Landing in front of the Sugarloaf Base Lodge while the enduro race featured four timed stages varying in difficulty, length, and steepness depending on location; between each stage, riders navigated untimed “transfer stages,” which involved chairlift riding, hiking, or pedaling.

A sentiment that was echoed throughout the morning—and which struck me as I arrived at the Admin Building that morning—was how incredibly exciting it was to see the parking lots full and the mountain brought to life with the crowds and momentum of ski season in the summer. 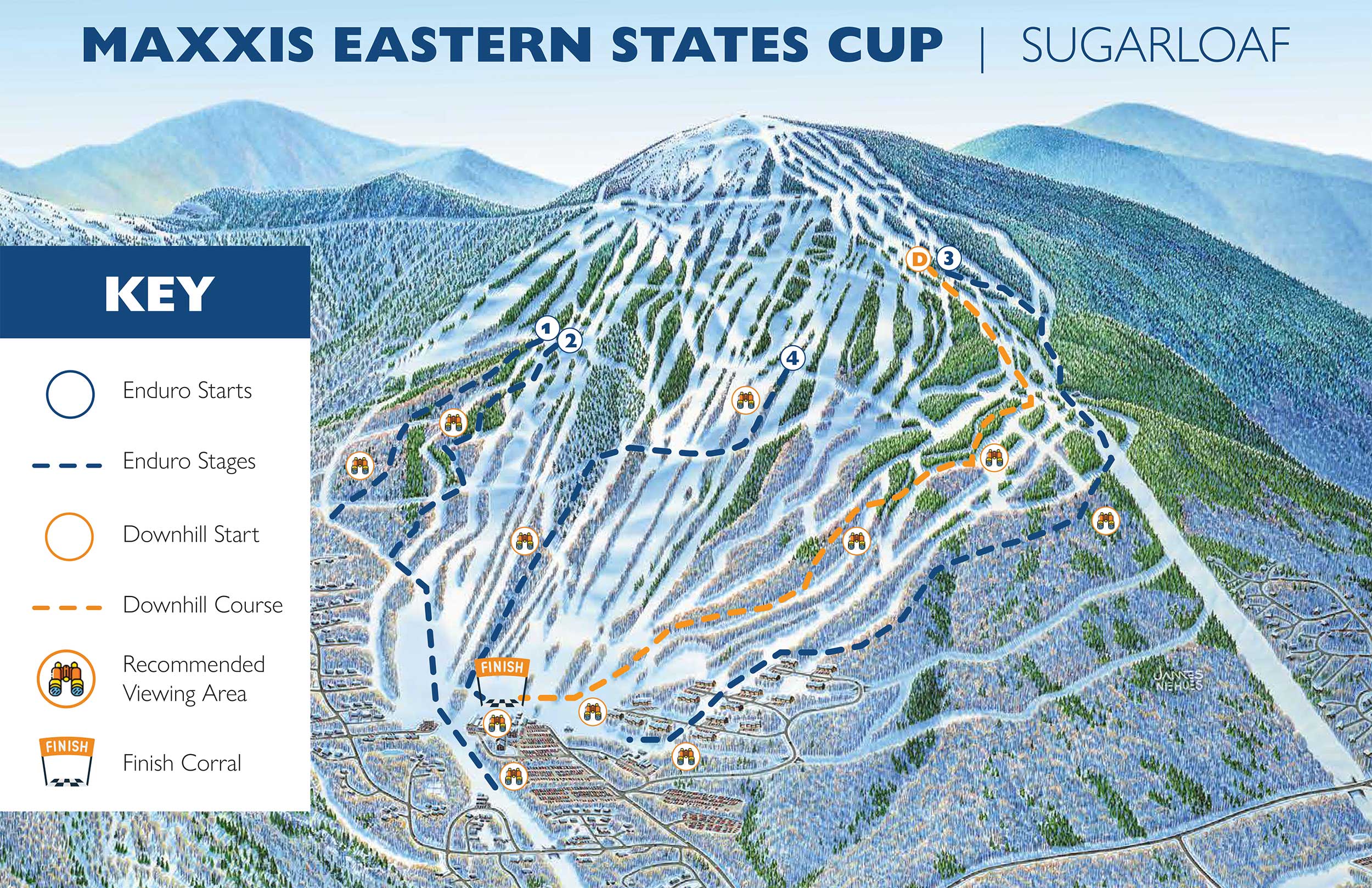 I was stationed at the fourth stage as a volunteer; my job was mostly to ensure both biker and spectator safety around the rock drop, a five foot obstacle enduro riders were facing fearlessly, and occasionally reposition the timer if necessary. I got there right around 11:00am as a collection of kids and their two coaches were dropping, and I continued to be absolutely amazed for 5 hours straight—seriously: during my time on-hill, I was able to witness some of the most impressive displays of mountain biking I’ve ever seen, and even more incredibly, I had the opportunity to photograph it!

It was really interesting to see the riders interacting in the line as they each waited for their turn, to get a glimpse of the community, and to observe the really raw moment of mental preparation each mountain biker took before dropping. I gained a greater appreciation for how mountain biking really requires this intensely creative and dynamic form of vision in which athletes can visual and chart the best route through, over, or around each obstacle—and, in the case of the enduro, their goal is to find the line that will take the least amount of time. 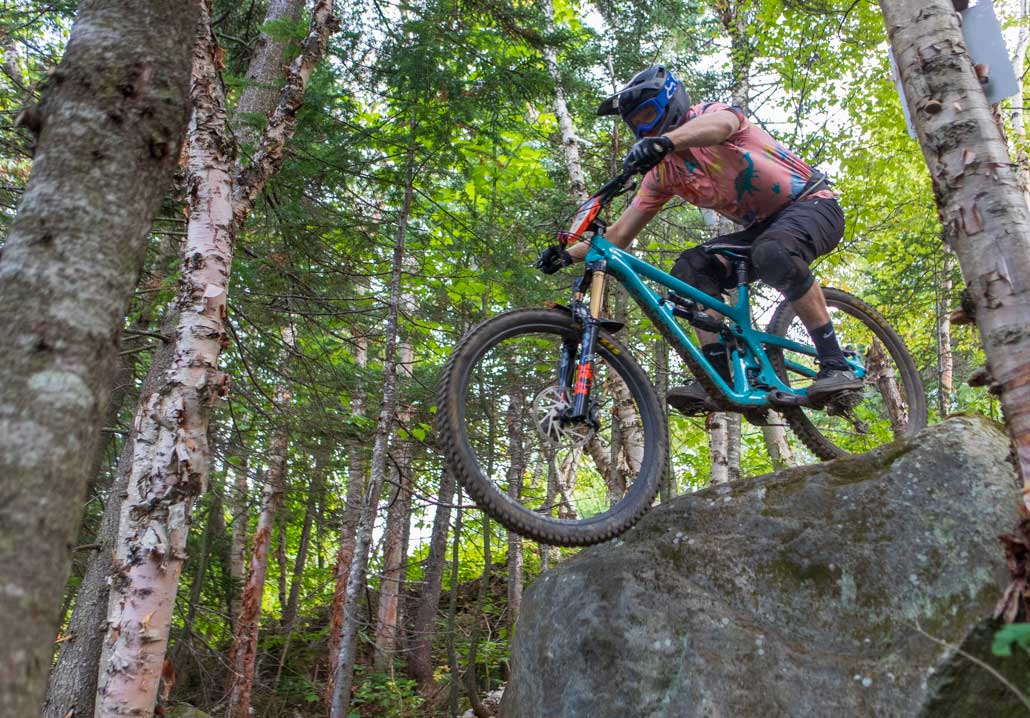 Ultimately, as I hiked down Competition Hill at the end of my shift, on the way to go edit my photos, I remember feeling really grateful for the opportunity to be on-site and documenting such an impactful event in the history of Sugarloaf’s mountain biking scene; the hype was high, and that energy was completely contagious! 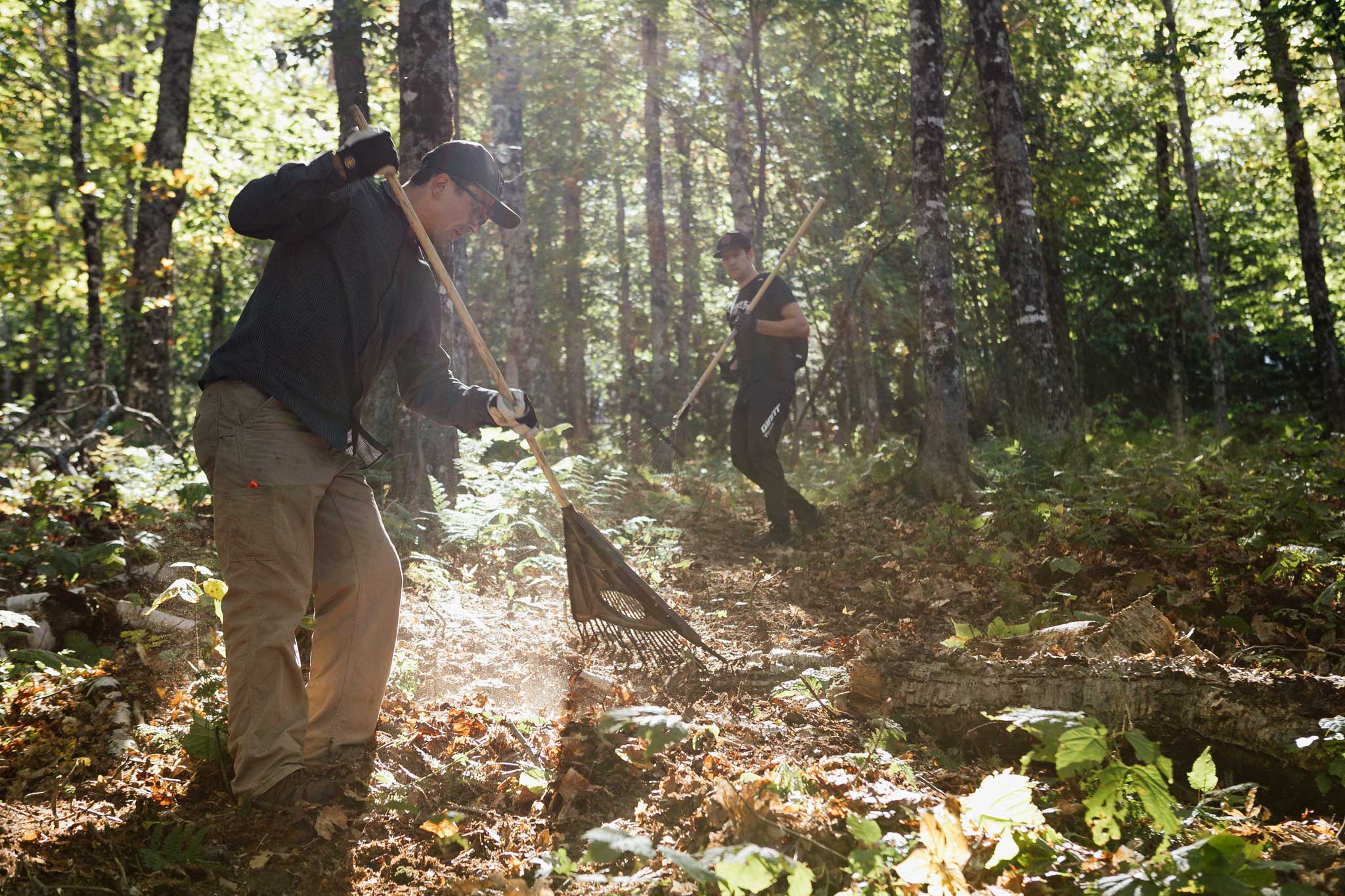 In this role, Craig is responsible for promoting gravity mountain biking at Sugarloaf, a component of which is working with organizers to bring racers and other mountain bike events to the mountain; he has also been spearheading the creation of rugged, natural enduro and downhill race courses at Sugarloaf while helping guide the development of the resort’s forthcoming lift-accessed mountain bike park, with trails for all ability levels–a key part of Sugarloaf’s 2030 development plan.

“There are a lot of really fun things happening with mountain biking at Sugarloaf, and it’s an honor to return to my roots as part of this momentum,” Craig said in May. “Thanks to local efforts, the Carrabassett region has already become a mountain bike destination, with this next phase of development on the mountain, we have an opportunity to attract top tier competitive events and festivals, which could be transformational for the local economy and riding community during the summer months.”

Craig agreed to an interview to discuss his experience hosting the Eastern States Cup, which he not only was an integral part of, but actually competed in!

Can you tell me a little bit about your experience at the Eastern States Cup on Sunday?

“I can certainly say that it was surreal to have hundreds of racers at Sugarloaf after a relatively quiet summer! I remember the energy that was present at the Widowmaker Challenge in the ’90s, and we certainly recreated that. My personal experience was amazing: on Sunday, our course inspection crew was on the Quad at 7:00am to check out the track and be ready for 9:00am opening.

“It was a beautiful day, and once we dropped into the trails, we learned the wind had dried the tracks to absolutely perfect condition. The energy at the rider’s meeting was tangible and everyone got on the hill promptly. From there I moved around by bike and vehicle, checking in on volunteers and our mountain staff, helping out wherever needed; I was continually amazed with how smoothly everything was going.

“In the back of my mind was 2:23pm, which was my Downhill ‘race’ start time. Riding up the lift with two old friends and getting a chance to—finally!—ride the DH track from top to bottom at speed was the perfect closure to this process.”

What was your favorite part about the event?

“First, the Spectators! It was heartwarming to see so many people out hiking around the mountain, cheering and being amazed by the riders’ skills. Every group of spectators was very appreciative of the opportunity to check out some gravity racing.

“Secondly, I'm so impressed with the Sugarloaf event and mountain staff’s ability to produce an unfamiliar type of event flawlessly. The lift ops crew did a great job getting riders up the mountain all weekend, riders were certainly satisfied!

“Third, the amazing turnout of young riders! I had a sneaky suspicion that the kids are into gravity riding these days, and they sure are, with such amazing skills to boot. Seeing 14-year-old Kale Cushman win the Pro Women's enduro race and downhill was a huge highlight!”

What was it like to get feedback on five of the all-new gravity-fed trails you and your team constructed this summer?

“Riders are always excited to ride new trails, so we were hopeful that feedback would be positive, but we were overwhelmed with just how stoked everyone was—especially as the trails started to wear in from the increased traffic. The ski run sections got fast and challenging, and the woods became full of rocks and roots, just the way we like it! Thanks so much to the riders for being vocal about their approval!”

What are you most looking forward to in hosting the Enduro World Series here at Sugarloaf next August?

“Honestly, it’s a huge relief to have hosted a successful event and received overwhelmingly great feedback our first time around! For next year, we're looking much forward to continued trail development and having the world’s best enjoy the experience to the fullest.”

Craig finishes our interview by emphasizing his gratitude, saying, “A heartfelt thank you the dozens of volunteers to came to help with trail work this summer! The Carrabassett NEMBA chapter helped us recruit volunteers in addition to working tirelessly to build mountain bike culture in the valley over the last decade. We're so excited to be complementing that effort with gravity experiences on the mountain!”

Jamie Walter is a photographer from Maine; many of you may know him from his time working for Sugarloaf as the mountain’s Marketing Content Manager and Staff Photographer from 2013 to 2016. Or maybe you know him from any one of his numerous awards and achievements—from having cover photos on Backpacker to Downeast Magazine, to, most recently, having a gallerie of work featured in The Ski Journal.

He returned to the slopes of Sugarloaf to shoot the Eastern States Cup: “I had an awesome time at the Eastern States Cup last weekend,” Walter says. “I was tasked with shooting stills for Sugarloaf and spent the day running around the mountain—sometimes quite literally—to capture the different Enduro stages and the Downhill course as well. Between Saturday and Sunday I shot over 6,000 photos using two different cameras; action sport events eat up memory when you are constantly rapid firing frames off in order to capture those golden moments.”

Speaking of golden moments, Walter says his favorite snapshot from the weekend was taken up near the start of the downhill course. “It shows a biker descending down Tote Road and has the iconic view of the Crockers in the background. I’ve shot photos in this location during the winter several times and I absolutely love the view, so to be able to shoot a biker descending the same trail during the summer is pretty rad.” 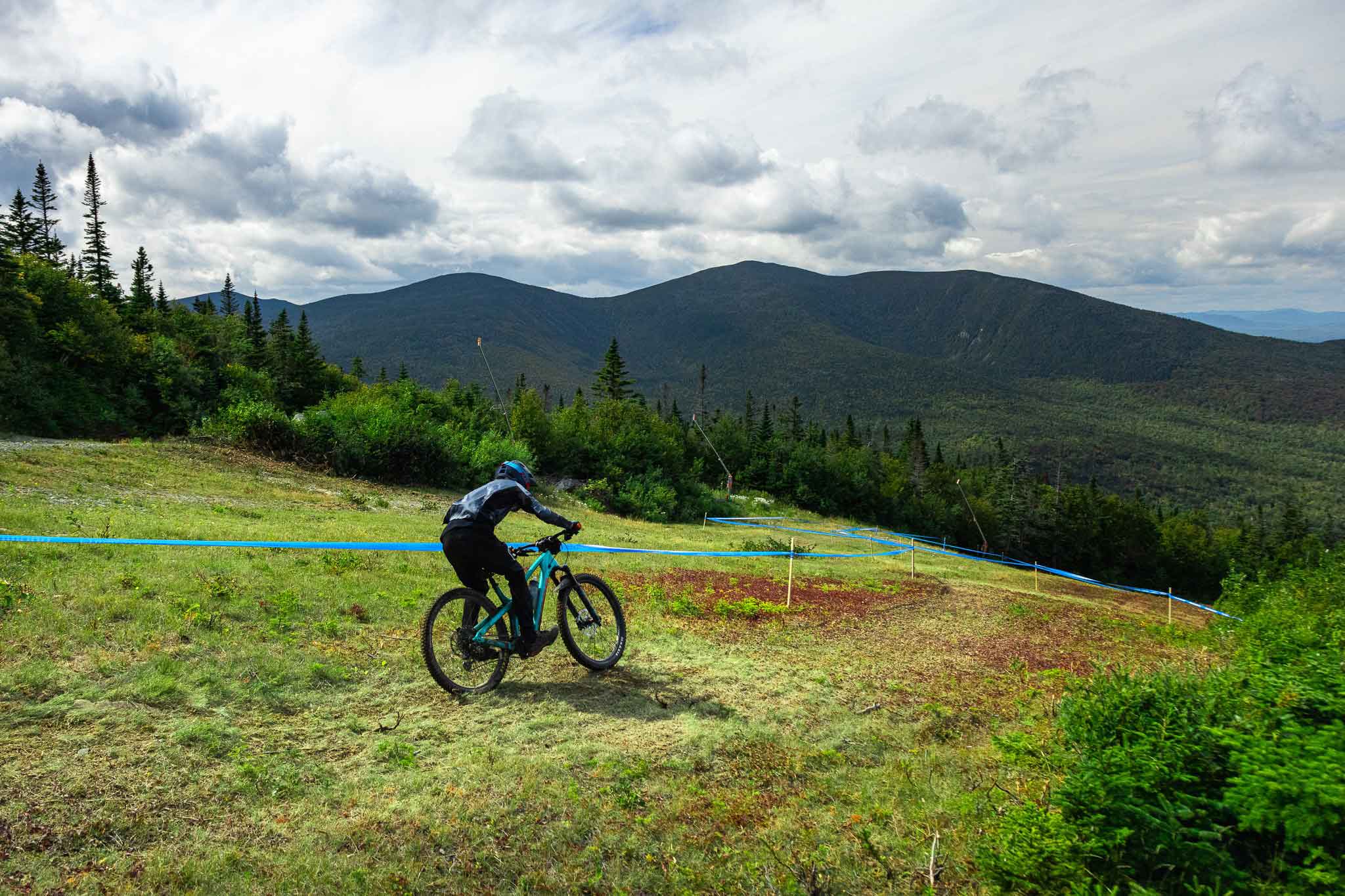 When asked what his favorite part of the event was, Walter responded: “Seeing how excited everybody was about it. The racers all seemed really pumped about the trails, the locals were thrilled to be able to ride a lift to bike down Sugarloaf for the first time, and even the event organizers were thrilled about how great the turnout was with participants and crowds. I was personally super pumped to see a bike trail that ran all the way down from the top of the Super Quad to the base—next time I’ll have to bring my bike to ride it!”