Mountain biking has become a staple of Sugarloaf’s summer scene; thanks to the efforts of the Carrabassett Region Chapter of the New England Mountain Bike Association, or CRNEMBA, and the town of Carrabassett, trail development—with options for riders of all abilities—has taken off to encompass an extensive network spanning more than 80 miles, plus there are no fees for trail access!

Parking is available at the Airport trailhead (located just behind the Sugarbowl), the Stratton Brook trailhead, and the Sugarloaf Outdoor Center, and bike rentals are available from several shops in the area. 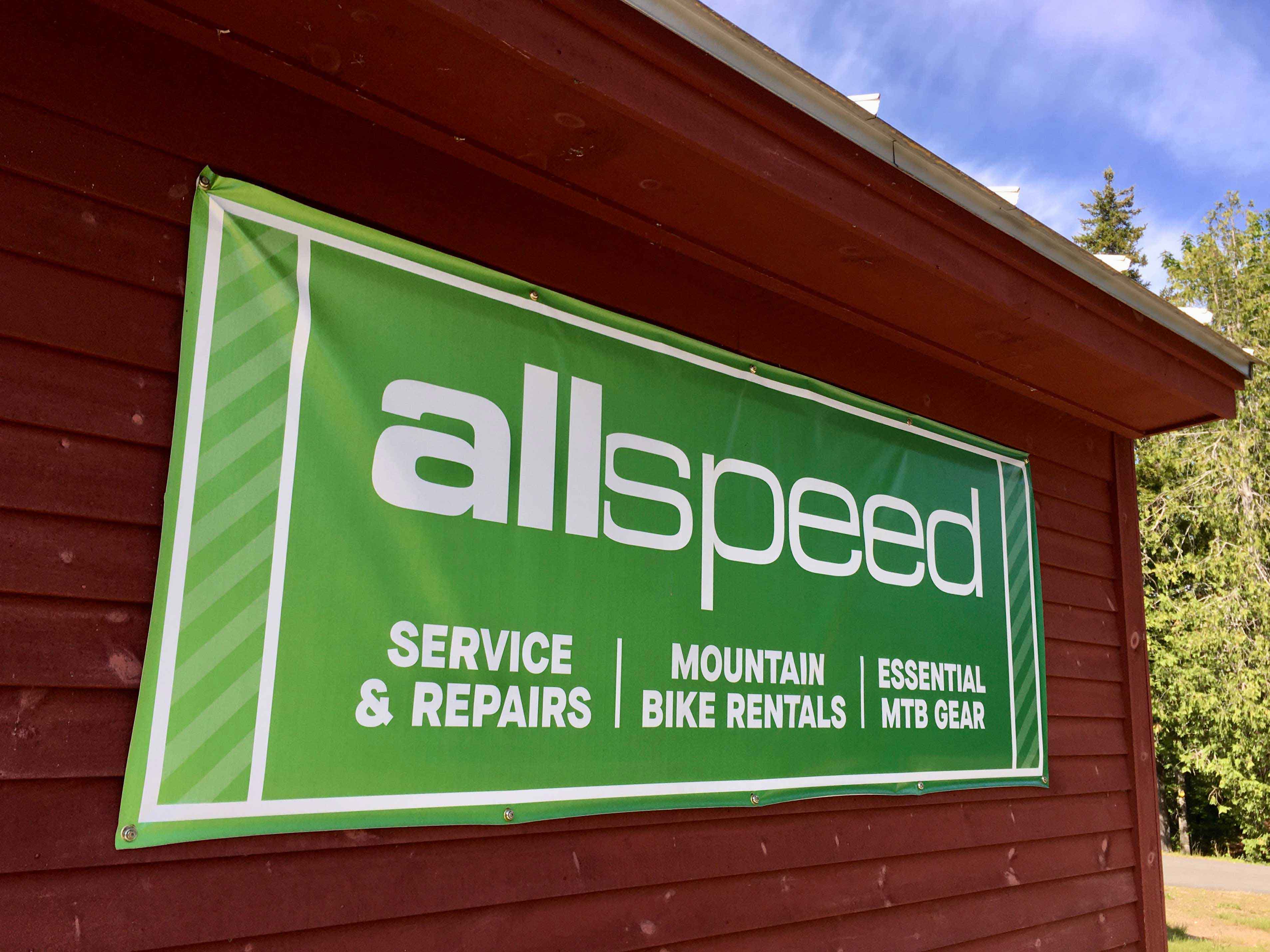 I rented from Allspeed Carrabassett, which operates out of the Sugarloaf Outdoor Center. The rental process began with a phone call, during which Allspeed staffer Mike helped me select which bike would be best; after a bit of back-and-forth, he ultimately suggested the Santa Cruz Tallboy, categorized on their website under Full Suspension 29”.

Like I told him and the rest of the Allspeed staff, I’ve ridden a bike before, but I’ve never taken it off the paved path—in fact, I think the last time I rode a bike was around the small town in the Netherlands I lived in almost four years ago; at the time, its main purpose was ferrying groceries to and from campus from the singular shop in town. But despite my personal inexperience, my overall experience at Allspeed made venturing into the wild world of mountain biking both accessible and easy: I can confidently assert that the Allspeed staff are an incredible resource for novices and experts alike.

Chronically early to a fault, I arrived at the Outdoor Center a few minutes before Allspeed opened (9:00am Wednesdays through Sundays), so I took a seat on their wrap-around porch and made an effort to organize my disaster of a backpack; nearby, two employees were chatting enthusiastically about bikes and business to a chorus of birds chirping and cheerful Spanish music playing from the speakers around the ice rink.

It was encouraging to see staff members so engaged in their work. Noticing that I was lingering about, they invited me inside and quickly got to work assembling my rental materials: one waiver later, I was well-equipped for my ride with a bike and helmet. I added the $15.00 premium insurance to the rental package. You might be thinking, “Not for me,” and listen, I get it: I used to not be an “add the insurance” person, but after an unfortunate incident involving a Smart Car rental in Santorini, I learned a valuable lesson on the importance of insurance—and hey, I’d say it’s far better to learn from my mistakes in that department than to make your own!

They even helped me size the seat and walked me through the handlebar mechanics—brakes, gear shift, seat shift—before Mike pulled out a trail map and made some suggestions for scenic spots to visit with picturesque photo ops. 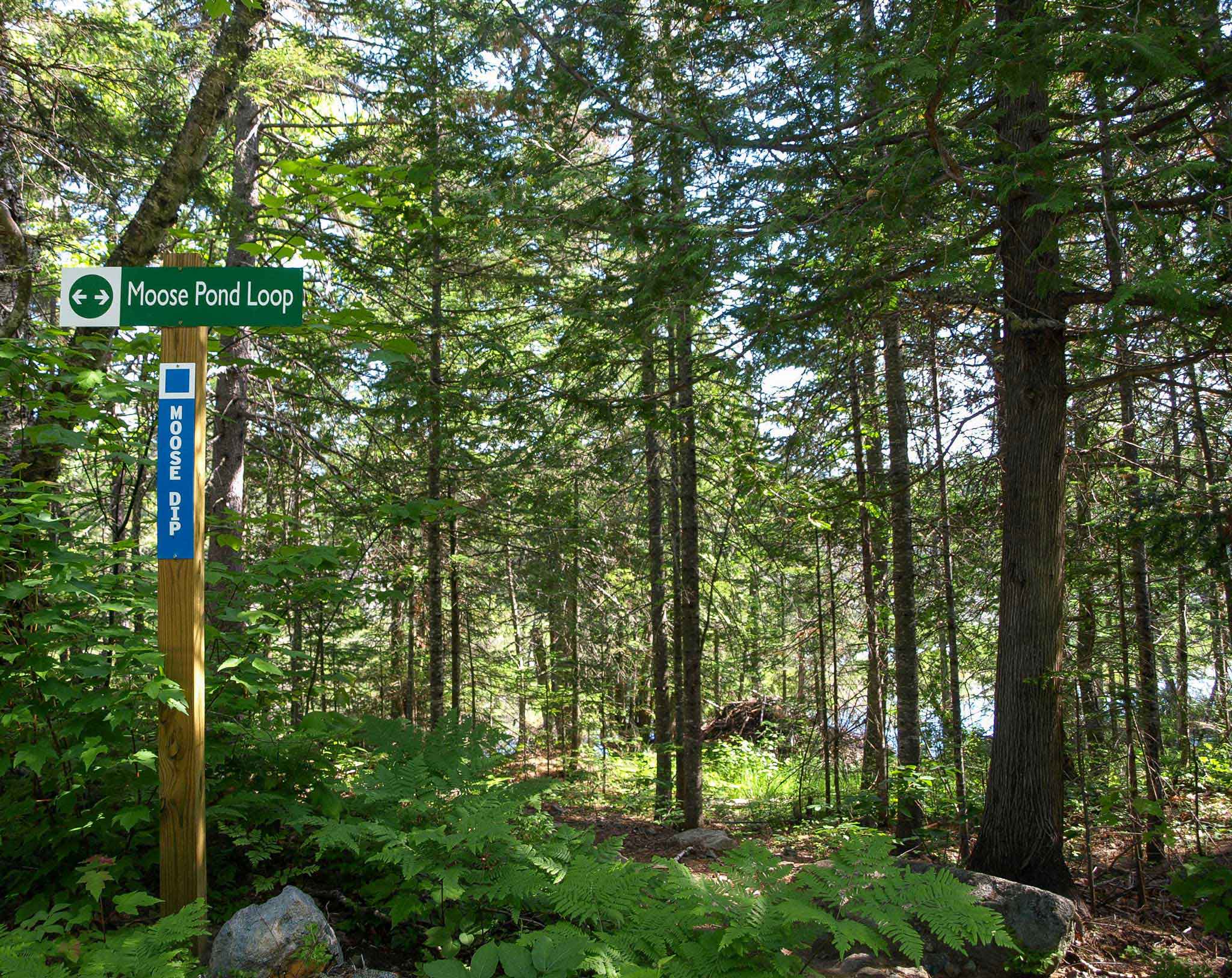 Per Mike’s recommendation, I started out with a lap around the Moose Loop—and just as he said, this proved to be an excellent option for beginner bikers: this trail, one of the easiest in the network, circles the Outdoor Center’s pond (sometimes referred to as “Moose Bog”), providing scenic sights on a combination of dirt and gravel surfaces with the occasional rock or root here and there.

The Moose Loop (0.5 miles) offers riders shallow climbs without significant obstacles or sharp turns, making it a great place to beginners to gain confidence in their abilities while getting their sea—er, bike?—legs. There was a brief adjustment period that involved getting better acclimated with the bike, its brakes, and shifting gears; I was feeling quite thankful that I seemed to be alone on the Moose Loop, as other well-seasoned bikers witnessing those tragic first few minutes would be dealing with an uncomfortable dose of second-hand embarrassment.

It reminded me of the first time I shadowed Sarah Sindo snow reporting: we did a run on Kings Landing while the snow guns were on and, in classic rookie fashion, I had forgotten goggles. You make that kind of mistake once, folks. Yeah, it was a little bit tough to watch—for Sarah; for me, I could hardly see anything—but the trick of it is pushing on.

After returning to the Outdoor Center’s entrance area, I took a quick but much-needed water break in the parking lot before continuing on towards the Snail Trail (0.4 miles) and the Route 27 Connector (also 0.4 miles). At this time, it was around 9:30am and the sun was shining down, making the network of winding trails running through the well-shaded woods ever-so-appealing. 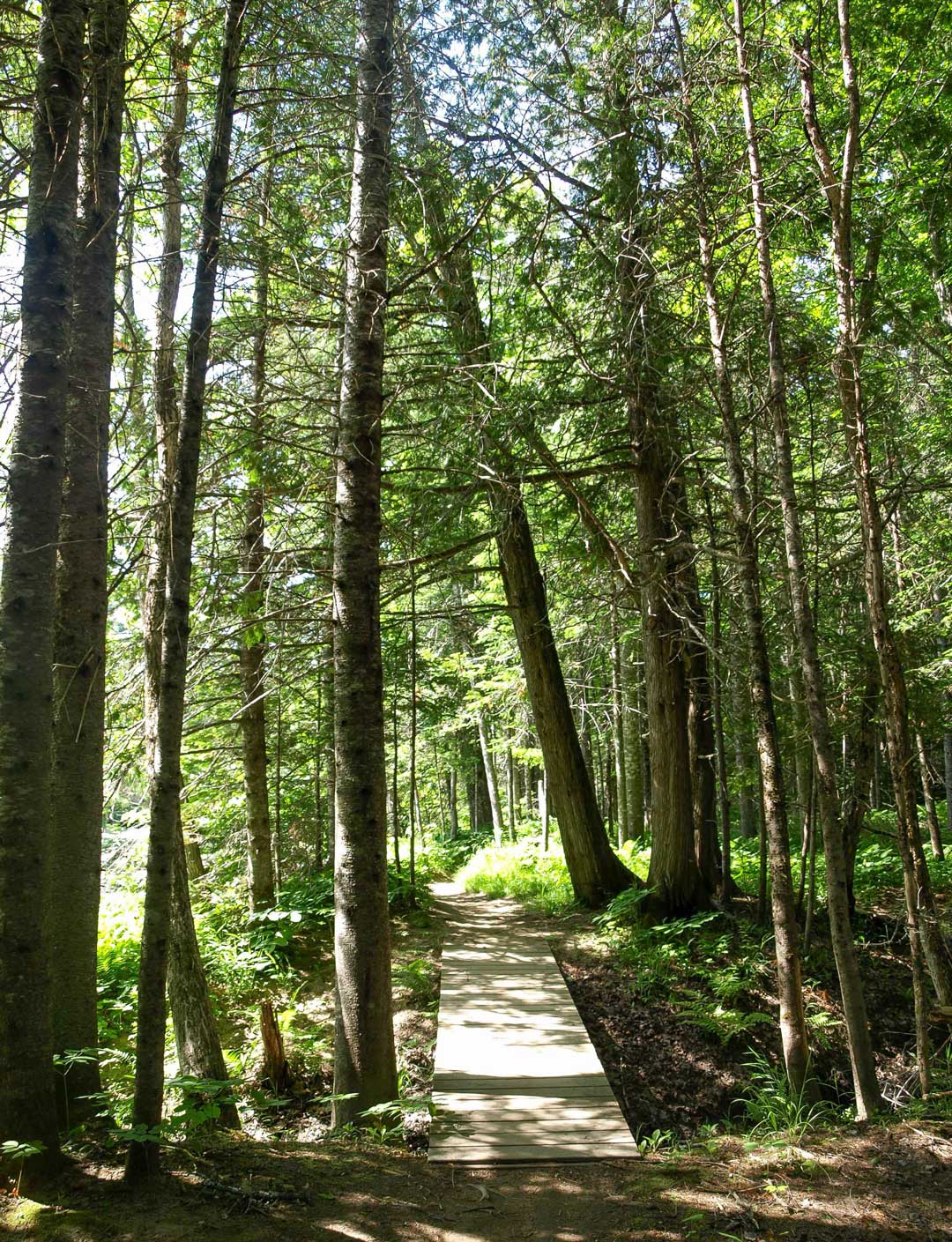 As I started down the Snail Trail, I began to shed whatever awkwardness I had been exhibiting in my efforts to remain upright; I started to have fun with it—a lot of fun. I’m talking full-face smiling, laugh-out-loud enjoyment. There is something indescribable about it, but I'll attempt to put it into words: you almost feel like you're flying, gliding around and over the rocks and roots to the sound of the bike spokes turning, feeling the wind in your hair, and watching the woods rushing past.

I had no trouble crossing Route 27 and was soon approaching the Narrow Gauge. As Mike instructed, I proceeded over the bridge and turned right onto Meade Trail, a mile-long loop through the woods right—and I mean right—alongside the rushing Carrabassett River with a few basic obstacles (man-made bridges and some sizable roots). I found this terrain a bit more challenging than the Moose Loop or Snail Trail but felt I had adjusted well enough to find it quite enjoyable rather than impossible; it was simultaneously adrenaline-inducing and blissfully peaceful. 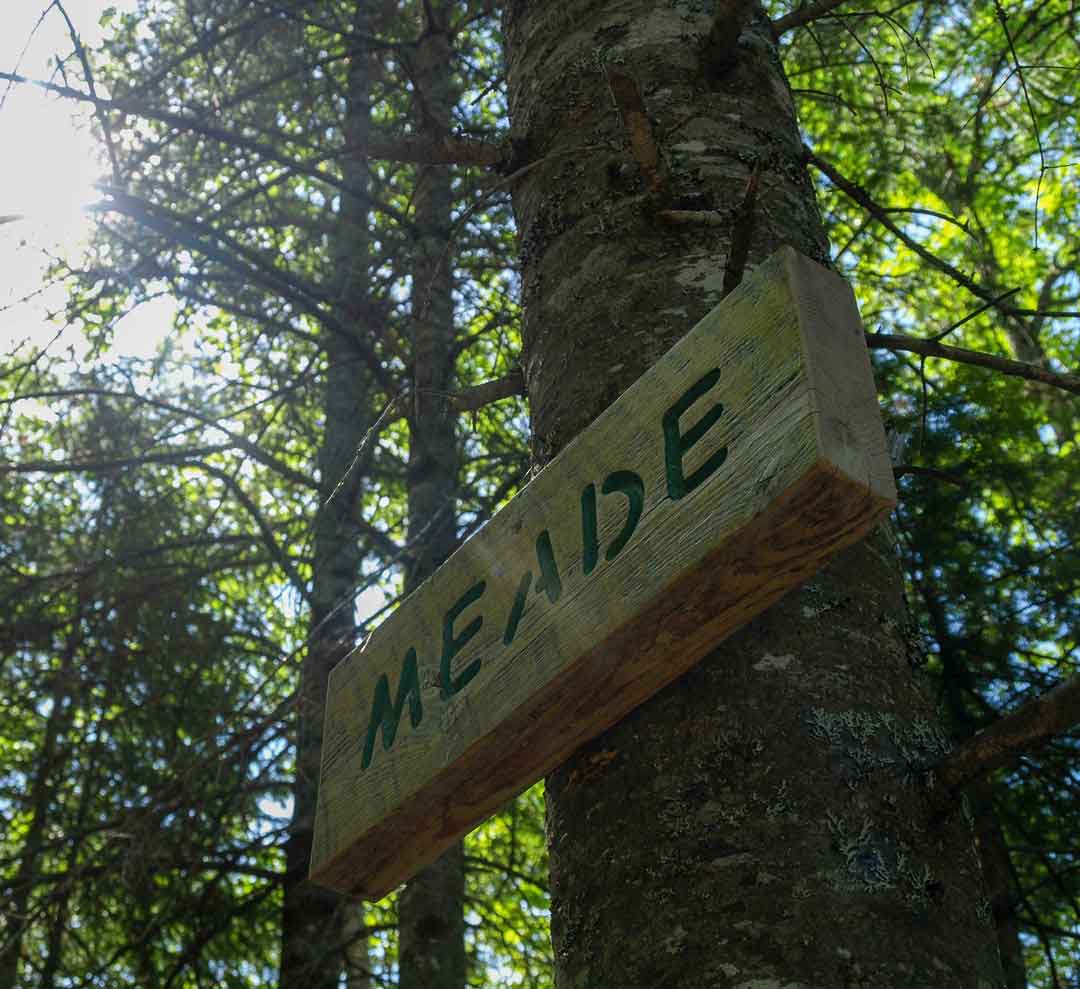 I then made my way towards the Grassy Loops, singletrack trails with great flow. This is still beginner terrain, but best saved for once you've mastered the basics. I biked along at a leisurely pace, taking in the scenic sights: beautiful butterflies flitting freely among the wildflowers, river views, and woodsy knolls.

I returned to Outdoor Center just before noon with helmet hair and a slight sunburn, feeling very grateful to have spent my morning mountain biking in the Valley. I want to especially thank the incredible rental staff at Allspeed for their trail and terrain recommendations, but also for their lack of judgment at my lack of ability; there's something so joyous about trying something new without finding fault in your skill (or lack thereof).

I got into bed that night, tired and slightly sore, certain I'd be walking like a cowboy the next day (because really, nobody warns you about that), already planning my next ride.