A Day in the Life of A STP Team Member

Get to know the folks behind the features!

Meet Terrain Park Manager Brendan O’Banion; he's celebrating his third season at Sugarloaf and the tenth working on terrain parks. The responsibilities of O'Banion's role include managing the parks from build through maintenance, as well as overseeing the terrain park crew. To that end, O’Banion and his tireless team toil around-the-clock to keep the parks as safe as possible, despite the “sometimes uncooperative weather of the North East.”

Did You Know? The Terrain Park Crew operates 24/7 first chair until the last park is taken down at the end of the season: the day crew works 7am to 5pm, the first shift snowcat operator is on from 4:30pm to 12:30am, followed by second shift in at 12:00pm through 9:00am.

As Manager, “everyday can be different for me,” O’Banion says. “One day I might be working all night in the snowcat building or grooming a park; the next day I could be working with the day crew on opening and/or closing of the parks, plus feature maintenance throughout the day. The day after that, I could be at Skowhegan building a skijor course at the Showgrounds. That’s what makes my job enjoyable, and challenging: my work days vary so much that they are rarely the same.”

Favorite part of a day-on-the-job: “Seeing the enjoyment and excitement from the skiers and riders using the terrain parks.”

Get to know terrain Park Grooming Foreman Joel Torrey; he’s been a Sugarloaf team member for 15 seasons, spending 13 years of his mountain career in terrain parks. “Sugarloaf is the best place I’ve ever worked,” Joey says. “My responsibilities are to make a good ski surface in the terrain parks and check on other groomer’s trails.”

Favorite part of the job? “Getting to make fresh cord with the cat/epic sunrises.”

Most challenging part of the day? “Climbing steep ice trails.”

A typical day-on-the-job for day crew Terrain Parks team member Travis Stymiest involves heading on-hill to inspect the parks. From there, he assesses conditions and completes any necessary hand work—this can be anything from cleaning up jumps to fixing features that could be a hazard. Then, at the end of the day, he works to close all the parks and rake the terrain out to help sustain snow surfaces for the next day.

Travis has worked at Sugarloaf for eight years, six of which were spent in the lift department; he’s been on the Terrain Park Crew for the past two while also spending a short time in both snowmaking and snow shoveling.

He says the most challenging aspect of his job is working around the weather. “Cold temperatures and rain turn everything to ice, and melting temperatures will start to uncover jumps and rails we want covered, so it makes maintaining parks more work and takes a lot more time. It can be a decent amount of work, but it’s very rewarding.”

Favorite park: “I like many features, but my favorite parks are Dropline or Stomping Grounds.”

Favorite part of a day-on-the-job: “Just being outside on the hill and talking to the guests that come into the parks.”

This is Park Ranger Mason Darveau’s first season as a Sugarloaf team member; he started as a snowmaker before joining the STP crew in January. “My role consists of making sure the rails and takeoffs for all of the features are looking great and hitting even better,” Mason explains. “Some day-to-day responsibilities include making sure all of the jumps are safe and well-marked off for the public, and making sure the parks have proper signage to warn guests of the dangers that come with the terrain parks.” 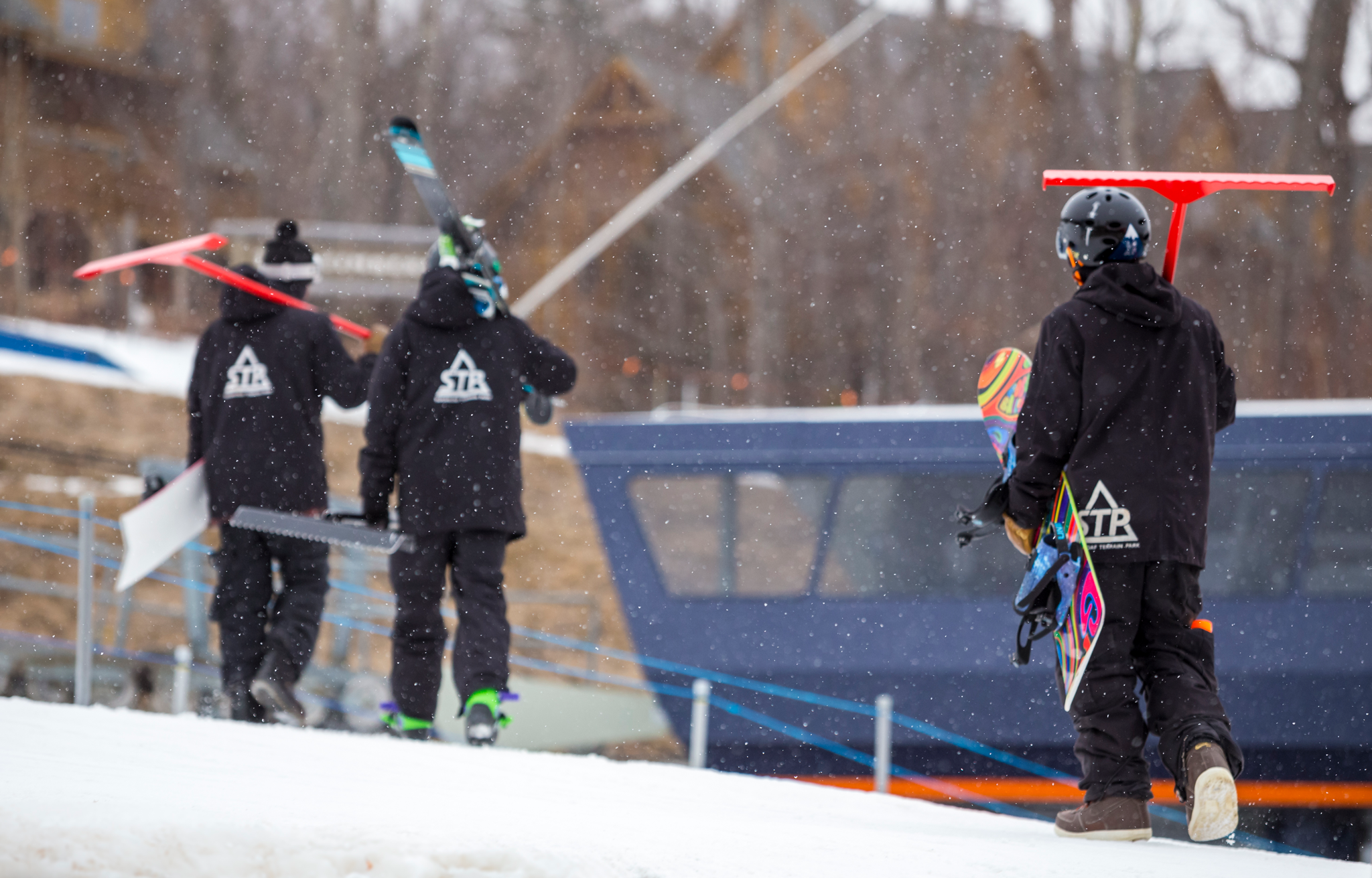 The most challenging aspect? “Making judgement calls on if a feature is safe or not.”

And the most rewarding? “On a bluebird day, I love seeing the Bigelows and looking out over the Valley; on days when it isn’t clear, my favorite part is just being able to ski and see the true enthusiasm that goes on all around the mountain.”

What’s something you wish more people knew about your job? “Raking in ski boots is tiring! And don’t duck the park ropes—they are closed for your safety.”

Tag along with Terrain Parks Crew member Ben Amburgey as he walks us through a day-on-the-job.

A little bit about Ben: Amburgey is in his fifth season at Sugarloaf, previously serving as Terrain Park Ranger. He currently works as Terrain Parks Supervisor, of which Ben says, “My job is to oversee daytime operations in the parks, and lead projects or work we have going on; I also help with a lot of the construction, design, and installation of features when we’re building the parks.”

Ben breaks down the beginning of a day-on-the-job: “We arrive at the mountain at 6:30am and lord the lift at 7:00am with patrol. From TOS, we ski down to the Halfway House above Upper Tote Park, check in with the park groomers, go over the plan for the day, and get out the necessary tools to open the parks. Some days this is just park takes and a drill; other times it’s plastic shovels if we have new snow.”

He continues by saying, “We set up signage and fencing, jump markers, inspect all features–making sure they aren’t damaged, greasing sticky rails, and cleaning up any handiwork that wasn't finished at close the previous day; that usually takes until 8:30am or 9:00am. At that point, we usually lap all the tools back up to the halfway house, complete the daily paperwork, and take a quick break before going out to ride through the parks testing features and interacting with guests.”

Most days, the Terrain Park Crew also has some sort of projects going on—whether that’s relocating tools for an upcoming build, repairing damaged features, or shoveling if its snowing out.

Then, at 3:30pm, the team regroups at the halfway house to begin the process of closing the parks, starting with Upper Tote and working their way down through Spurline, at which point they split up to attend to all the lower parks. “Closing rake-out is the most crucial part of our job, and that’s where we do the brunt of our handwork on a normal day, allowing the takeoffs time to set up overnight so they stay in better shape for longer the next day. Although most people are off of the hill by 4:15pm, we could be out there as late as 5:00pm, so headlamps are a must early in the year.”

After closing, the crew will swap out any features that need to be changed. “On those days, we'll fire up one of the park cats when we get down from close and grab the forks, which hook onto the blade of the cat, turning into a sort of forklift; we can then bring up the rail or box that we are going to set up to the park. Once it's in the correct location, the forks come off and we shape as much of the takeoff and landing with the cats blade as we can before hopping out and doing the fine tuning with park rakes. If the snow is soft, we'll also torch the sides and corners of the takeoff so they hold their shape better.”

“Although we’re a small department, between the hand crew and grooming, we're active 24 hours a day,” Ben says. “And our work intersects with a lot of other departments! It can get kind of overwhelming sometimes trying to keep track of it all, but when it comes together as a really fun park, it's worth it knowing that you contributed to it.”

Favorite park? “Stomping Grounds is a classic: it’s been a park just about as long as I've been alive, and we're still finding new ways to build all kinds of different lines in there. The new park on Spurline has also been great, and should keep getting better as we experiment with different ways to layout features on that trail in the coming years.”

Favorite part of a day-on-the-job? “Opening the parks during sunrise, or closing them during sunset and skiing down in the dark early season.”